"Struggling to make ends meet, five New York City dancers respond to a Craigslist ad looking for women willing to shave their heads for money. What follows is a bizarre journey with the mysterious men who directs each of the dancers by email on the very specific rules of a game. The film focuses on Cori, one of the dancers whose unusual childhood comes into play as the women's relationship with the men evolves with surprising results..."

Review of Blade # 1
By Kerby Pierre

Blade #1 is a haunting yet mysterious story about a group of women who get money for shaving their head. It seems harmless at first, in fact almost too good to be true. Some of the women were offered hundreds to thousands of dollars just for shaving their head. Although the instructions came from an ominous place, they were very specific. The razor had to be a number one blade. Getting accounts from different women who were doing the same thing, each story seemed vastly different and the film centers itself on the emotional impact that the women felt while shaving their head. The documentary takes an eerie turn when the women start to compete for high amounts and up the ante to get more money and look for new ways to keep him interested in the shaving.

The film really draws in viewers with the story. It focuses on the strengths of the story, sets it up like a narrative, and uses the women’s interviews to structure the story in chronological order. It is as if the audience is watching a film with the characters growing and evolving from this experience. It’s evident that the women in the film are changed by this event in their life. The blade becomes a part of the story. The blade is constantly in the film with a menacing buzzing sound and a sense of terror in the women’s eyes every time, but the idea of money at the end just overpowers the fear. Blade # 1 is an official selection of the New York City Independent Film Festival and will be screened at the festival on October 12-18, 2015.

The Seamstress
By Zuzka Kurtz

"A requiem to Made in America Fashion"

Eat Something
By Zuzka Kurtz

The Ottoman Empire
By Zuzka Kurtz

"On the verge of collapse"

An IPhone video correspondence between the artists Pat Lenz and Zuzka Kurtz.

A journal of balancing act between major political upheavals and domestic tranquility shot between 2011 and 2013.
Editing and sound, Geoff Hug - www.oscillatingpictures.com and www.patlenz.com

Trailer for 7 Ways 2 Skin a Cat

My Inner Sole The Performance was performed in The Lion Theater in NYC in December 2010. This excerpt is from the performance.
(4:35 min. excerpt of 51:45 min. video)

"My Inner Sole", a multimedia installation by Zuzka Kurtz, was presented in its first incarnation at SlaughterhouseSpace in Healdsburg, California in 2009.

"Threading" is a video component of My Inner Sole, a multimedia installation by Zuzka Kurtz. It was presented in its first incarnation at SlaughterhouseSpace in Healdsburg, California in 2009.

Shifting between hands sewing with a needle and then with a machine, the artist's voice recounts her family's narrative. Her stories oscillate from porous to particular. The hands seem to emerge from the viewer's point of view, implicating the onlooker in the narrative’s subjectivity. 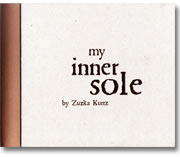 The book chronicles the cast of eighteen skeletal characters that participate in the sculptural installation.